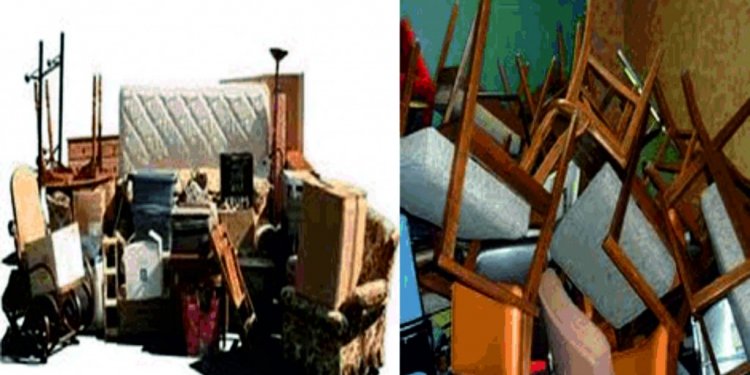 The tenant I had living at the property I own in Hollywood left a horrible mess inside and out when they left the premises without my knowledge. Again I got stuck with hoarders who didn't bother to take all of their junk with them. I remembered calling Waynes Junk Removal a few years back who I was very pleased with. Wayne came out, gave me a great price. I think because we did business earlier. His team did a wonderful clean out in less than a day. I could not believe how efficiently it went. Some of the trash was recyclable so Wayne took care of that. Everything was clean and swept up when the job was done. I was very happy with his crew and tipped them well.

I have called this guy 4 times.he doesn't answer the phone and he doesn't return calls. Life must be good.

I had some unwanted furniture in my apt. that I needed to dispose of: A worn out sofa, chairs, table, and other misc. items. I found Wayne's Junk Removal on Yelp with stellar reviews. I called him and he explained his services over the phone. We made an appt. for the next day in the afternoon. Wayne arrived, with his helper, right on time and proceeded to quickly load up his truck. Things couldn't have gone smoother! Wayne was friendly, professional, and his pricing was very reasonable! Great job! I will definitely contact him again if I need to remove anything else, for sure!

I found Wayne through a Goggle search, read his reviews on Yelp and decided to contact him for a quote. He was quick to respond, timely to provide a quote and was efficient in removing the considerable amount of junk I needed hauled away. I was not at the location which was never a problem as Wayne communicated whenever necessary making the entire process super easy. I felt for the amount of junk I needed hauled away his rate was very fair. Professional, efficient and honest pricing, I would highly recommend Wayne's Junk Removal.

I got an estimate from Wayne through email, set a date for him to come by, and he showed up right on time. The job was two heavy sofas and a chair, and I am on the second floor. Wayne choreographed his two guys, while they carried this stuff and negotiated the doorways, awkward turns and, of course, the stairs. He honored his price and they all worked very hard. I was so glad to see the stuff go, and Wayne is a very nice guy. No doubt I'll be calling him again. Highly recommended. Valuable service.

Wayne and his team killed it today. We had an inordinate amount of stuff left from the original tenants and no interest in keep the same. Rather than dealing with the randos on Craigslist, we decided to hire professionals to take it all away. Wayne was great communicating arrival time, pricing, and even explained where the junk would be placed. He takes the time to recycle applicable items and donates furniture worthy of future use. I wouldn't even consider making more than one trip to goodwill in future moves. I'll gladly hire Wayne and consider it a bargain.

I've used Wayne's fantastic junk removal service twice now. We've lived in our building here in WeHo for 10 years, and found Wayne originally on craigslist 5 years back. He and his team did an amazing job clearing out trash, construction trash, junk and hazardous materials from our backyard both times. He comes and gives a fair and accurate estimate of both price and time and delivers in his promise. We have a difficult narrow driveway to get in and out of adding to the job's challenge but they weren't phased. Lastly, Wayne himself is a real pleasure to deal with. Super nice and easy going, prompt and communicative to do business with. I'll definitely be calling him next time the trash is piled up!

Wayne is absolutely fantastic. I had six roommates for the last 8 years and all of their junk had accumulated in our garage which looked like it should have been on an episode of Hoarders. Wayne and his team were fast, extremely courteous, and very affordable. Wayne also told us that he recycles everything that has the ability of being recycled - he said at least 60% of our junk was going to go to specialized recycling centers that each cater to different types of materials. Wayne made us feel like it was a bizarro Christmas where all the things you want out of your life disappear in under an hour!

Wayne was awesome. Came out and gave me a bid the day after I requested it. Then we set a time a few days later where he came out with his crew and completed the job with no hassle. They hauled away a bunch of junk left over when I bought my home, as well as 16 bags of yard waste pile-up. Easy peasy.

So happy to have found Wayne's Hauling services here on Yelp. He was on time, friendly and hauled away my large television, tv stand and staionary bike. I will definitely be using his services again. THANKS Wayne!

I can finally walk around the outside of my house without having to see a bunch of crap everywhere! I'm so happy. Wayne is very professional, reasonable, and friendly. I couldn't recommend him more.

I had a couple of large piles of assorted junk behind my house from a combined garage clean out and a landscaping job. After finding Wayne on craigslist he came out to the house to give me a price to remove everything that was extremely reasonable. We set up a time for Saturday and Wayne was there right on time with his crew. They separated everything into piles and loaded it up in a few hours and swept the area clean. Amazing job! As a total plus Wayne and his guys were very friendly and personable. And as a follow up I received an email with the breakdown of what materials were recycled, and the total volume and weight of the load. I will definitely use Wayne's service again, and would highly recommend him to anyone else. Thanks Wayne!

I've been living in the same apartment for 14 years and needless to say, I'd collected a lot of stuff I didn't need anymore. I finally did a big clean out and had a pile of old dishes, clothes, computer stuff, a rickety old chair, some other stuff that HAD to go! A friend of mine had recently used this guy Wayne from Wayne's Junk Removal. She said great things about him. So I called him to tell him what I had and he said it sounded like a half load. He gave me his prices and said he'd come out the next day. Sure enough, he showed up on time with his helper and they cleared out my stuff in about 30 minutes. They were fast, friendly, professional, and efficient. I asked Wayne if he'd be willing to stop off and donate what he could. He assured me that they always donate stuff, as well as recycle what they can. In fact, a few days later, he even mailed me my Donation Receipt for the stuff he dropped off at the facility! Awesome! He's GREEN as well. I am so happy to have that junk out of my life and it was great using Wayne's service. Thanks Wayne!